From capacitor to capacitive sensor – Interesting facts about a proven technology

The history of capacitive sensors began as early as 1745. Independently of each other, the cathedral dean Ewald Juergen Georg von Kleist and a year later the natural scientist Pieter van Musschenbroek experimented with the arrangement of glasses and metal parts, suffering slight electric shocks during their tests. This discovery is known today as Kleist's or Leiden's bottle and represents the first capacitor in modern history. This capacitor was subsequently developed further, resulting in a constant stream of new applications, including in sensor technology, where it is better known as capacitive sensors.

These sensors are, in a sense, capacitors with special designs that make it possible to keep the capacitance variable and then evaluate it via an electronic circuit. This variability can be achieved, among other things, with movable capacitor plates. If the distance between the plates increases due to a mechanical force, the capacitance of the capacitor decreases. If one side of the capacitor now consists of a diaphragm, water pressure can be determined, for example. If this sensor is immersed in a lake, the level can be determined via the hydrostatic pressure.

Another possibility to influence the capacitance is offered by the insulator between the capacitor plates. This is made possible, for example, by cylindrical capacitors in which a rod represents one capacitor plate and a tube placed over it represents the other. If the air in the tube is displaced by another medium with a greater permittivity εᵣ, the capacitance also changes here and can be converted into a distance, for example.

These methods are used in our pressure, filling level and level sensors, which can be found quickly via our product selector. The capacitor plates do not necessarily have to   run in parallel or face each other. A capacitor with unfolded or back-to-back plates could be understood as open and is the basis of our capacitive proximity switches, the absolute classics of this sensor family. Here, too, the insulator in the initial position usually consists of air. If this is displaced by another medium, the relative permittivity in the detection space of the sensor changes, which can trigger a switching operation.

Electric fields can always propagate. Therefore, the vacuum ε0 serves as a reference point of the relative permittivity εᵣ In practice, the sensors detect any material with a relative permittivity of >1.5. The larger this value is, the larger the sensing distance will be in the end. The possibility of being able to set the sensors' threshold value again expands the range of applications immensely. For example, levels can be detected through a plastic or glass wall if the permittivity of the medium exceeds that of the wall by about five times.

As the proximity switches of this sensor family have always been faithful companions in our portfolio, we have decided to offer a preferred series in order to maintain a good balance between requirements and price. The sensors are available in a cylindrical threaded housing for flush mounting under the following part numbers. 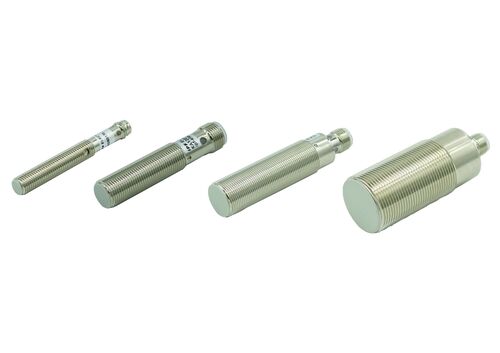