Programmable transmitters are used for processing analog signals. Until now, ipf electronic has only offered devices that were designed for front panel installation. Mounting on a top hat rail could only be realized in combination with an appropriate holder.

With the new BA870100, this work step is now completely eliminated, as a top hat rail housing is now standard with the device. At the same time, the new product series brings significantly more functions than its predecessors. The advantages are obvious: time savings due to simple installation and cost savings due to more functionality and thus more potential applications for the BA870100. The intuitive color TFT display (display languages German, English, French and Spanish) and the navigation via three menu keys further ensure easy handling and quick configuration of the device. Two optionally linkable analog inputs, either voltage or current, with freely selectable units and an external teach input with optional zero point function enable recording of a wide range of possible input signals.

Four digital outputs, as well as one analog output, which can be used as voltage and current output on two terminals, pass on the signals. They can be assigned to any of these inputs, no matter in which combination. A 10-bit A/D converter guarantees the appropriate resolution of the required signal.

Another new feature is the possibility to switch the output signals in any desired form (NPN/ PNP, normally closed/ normally open function, time functions). By additional parameterization of the switch-on and switch-off points, as well as a hysteresis or a window function, it is possible to further transform the output signals. 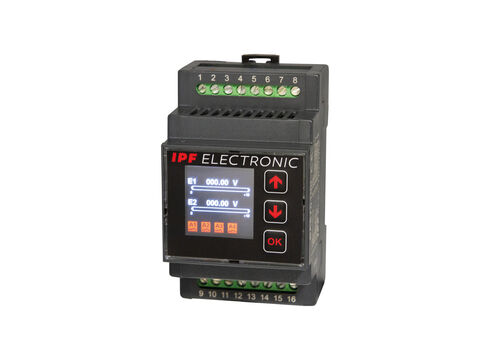